My mom emailed me this joke, and I thought it was pretty good! So here you are, for your Monday morning pleasure:

There were four sophomores taking chemistry and all of them had an ‘A’ so far. These four friends were so confident that the weekend before finals, they decided to visit some friends and have a big party. They had a great time but, after all the hearty partying, they slept all day Sunday and didn’t make it back to Florida State until  Monday.

Rather than taking the final then, they decided that after the final they would explain to their professor why they missed it.  They lied and said that they visited friends but on the way back they had a flat tire. As a result, they missed the final. 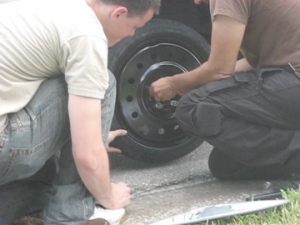 The professor agreed they could make up the final the next day.  The guys were relieved.  They studied that night for the exam.

The next day the professor placed them in separate rooms and gave them a test booklet. They quickly answered the first problem worth 5 points.  Cool, they thought. Each one, in a separate room for privacy and quiet. This was going to be easy … then they turned the page

On the second page was written, “For 95 points: Which Tire?”

2 thoughts on “A Monday Chuckle”